The time has come for you and warriors to take part in a battle of your life. This is a Totally Accurate Battle, the one that will make you laugh hard and relax on the one side and concentrate your attention on the other. In fact, the developers were very successful at balancing this title and making it equally thrilling and relaxing. The other kind of balance that developers were successful to reach is surely a combination of simplicity and variety with secret units and locations.

From the first sight, you have a title, where you just have to create and equip armies all over again, passing the levels and fighting against other armies. As a commander, you don’t take part in the action as it is. Instead, you are an eye that sees everything. In other words, you control the camera and fly around the field, observing the battle from all possible points. The number of available angles is striking, so you literally can see every single detail and move of your soldiers. See them beating the opposing army down and feel the real glory of the battle! We bet that you will have so much fun when arranging the armies and fighting against your enemies. Make sure that you improve your tactics and pay attention to the unit choices you make. A thoughtful approach will bring you victory! 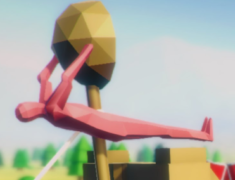